I love to swear.  There’s just something about inappropriate language that is…well, appropriate.  When I first became a mother I didn’t worry too much about my foul mouth because as a newborn my son was barely aware of his surroundings let alone what I was saying.  However, now that he is 16 months he is listening to everything I say & watching my every move; quick to learn & imitate.

How am I supposed to properly express myself?  Son of a biscuit, fudge nugget & gosh doggy just don’t have the same ring to it.  How depressing.  He hasn’t started talking just yet, but it’s coming any day now and I would be mortified if his first sentence included some of my favorite filthy words.

Pardon my French, but F*CK! 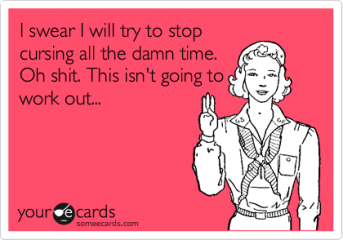